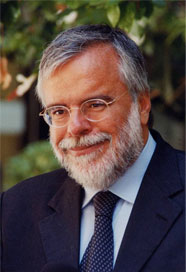 Andrea Riccardi is Professor of Contemporary History at La Terza University in Rome.

An expert in contemporary humanistic thought, his is an authoritative voice in the international scene. A number of universities have granted him honorary degrees in recognition of his historical and cultural merits, including the Catholic University of Leuven (Belgium), Cardinal Herrera University – CEU of Valencia (Spain), Georgetown University in Washington (USA), the University of Augsburg (Germany), and IAE Jean Moulin University Lyon 3 (“en raison de services éminents à la paix et à l’Université).

Andrea Riccardi is also known internationally for having founded, in 1968, the Community of Sant’Egidio. In addition to its social commitment and its many development projects in the southern hemisphere, Sant’Egido is known for its commitment to favouring peace and dialogue. Andrea Riccardi played a role in mediating various conflicts and contributed to attaining peace in several countries, such as Mozambique, Guatemala and the Ivory Coast. In 2003, TIME magazine included him in their list of thirty-six “modern heroes” of Europe, individuals that stand out because of their professional courage and humanitarian commitment.

Appointed professor in 1981, Andrea Riccardi has taught at the University of Bari and at La Sapienza University in Rome. He is a well known scholar of the Catholic Church in modern times and of religion in general. Among his recent publications: Il secolo del martirio. I cristiani nel Novecento (‘The Century of Martyrdom. Christians in the 20th Century’, Milan 2000; translated and published in ten languages), Governo carismatico (‘Charismatic Government’, Milan 2003), Convivere (‘Living Together’, Rome-Bari 2006), Il “Partito romano” (‘The “Roman Party”‘, Brescia 2007).

L’inverno più lungo. 1943-44: Pio XII, gli ebrei e i nazisti a Roma, (‘The Longest Winter. 1943-44: Pius XII, Jews and Nazis in Rome’, Rome-Bari 2008) examines Rome through the Nazi occupation, highlighting the events involving the Jews and their persecutors against the backdrop of the entire complex situation of the city during World War 2, studying the role of collaborationists and silent witnesses, people frightened brave, as well as the Church.

In 2011 he published Giovanni Paolo II. La biografia (‘John Paul II. The Biography’, Cinisello Balsamo 2011, published also in French, Spanish, and Portuguese), which draws a comprehensive picture of the Pontiff as a key personality in the 20th Century, whose life epitomizes the history of the last century.

On 18th November 2004, he was given the International Balzan Prize for Humanity, Peace and Brotherhood among Peoples “for his commitment in reviving peaceful coexistence among different ethnic groups and promoting humanitarian action, peace and brotherhood among peoples – regardless of their religious creed – and especially for creating the DREAM programme combating AIDS and malnutrition in Mozambique, a concrete model for other struggling African countries”.

On 21st May 2009, he was awarded the Charlemagne Prize, which is assigned annually to public figures and institutions promoting a united Europe and contributing to spreading a culture of peace and dialogue. Over the years it has been given to eminent European statesmen, such as Alcide De Gasperi, Konrad Adenauer, Winston Churchill, Robert Schuman, Carlo Azeglio Ciampi and Angela Merkel. Andrea Riccardi is among the few non politicians to have received the prize. The motivation reads: “In tribute to his outstanding involvement for a humane Europe exemplifying solidarity inside and outside its borders, for understanding among peoples, cultures and religions, and for a more peaceful and just world.”

On 16th November 2011 he joined the Government of Premier Mario Monti as Minister (without portfolio) for International Cooperation and Integration Policies.