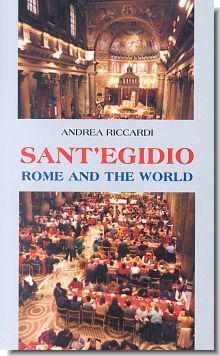 Reading this book of interviews by Andrea Riccardi puts us into contact with history, with the reasons and problems of Sant’Egidio, in a highly personal fashion. Having read it myself I offer this wish: that the great inspiring principles lived in practice rather than formulated in theory or written programmes – the primacy of God, prayer, and scripture and, at the same time, the urgent need to be close to the poorest and most disinherited, the desire to renew society and bring it to life through inter religious dialogue and the service of peace – may all this be preserved intact by Him who alone presides over changes in the Church and keeps them in unity and coherence, that is, the Spirit of God. Cardinal Carlo Maria Martini, Archbishop of Milan In the revolutionary days of 1968, Andrea Riccardi was “looking for something. Along with classmates at Rome’s Virgilio High School, he found it not in the protest but in prayer. The gospels seemed authentic and non-ideological, says Riccardi, now 47 and a professor of contemporary history. The Students founded a lay Catholic community called Sant’Egidio. Today Sant’Egidio has 15,000 members in 20 countries. Apart from its charitable work. it dabbles in freelance peacemaking. Sant’Egidio helped broker the 1992 accord in Mlonzambique and has tried to intervene in Algeria and Sudan. Critics say it has been too close to the bad guys in both countries, but Ricardi argues: If you want to make peace you have to try to reason with those making war. For this revolutionary, war is the greatest poverty of all. Time, 21 ApriI 1997